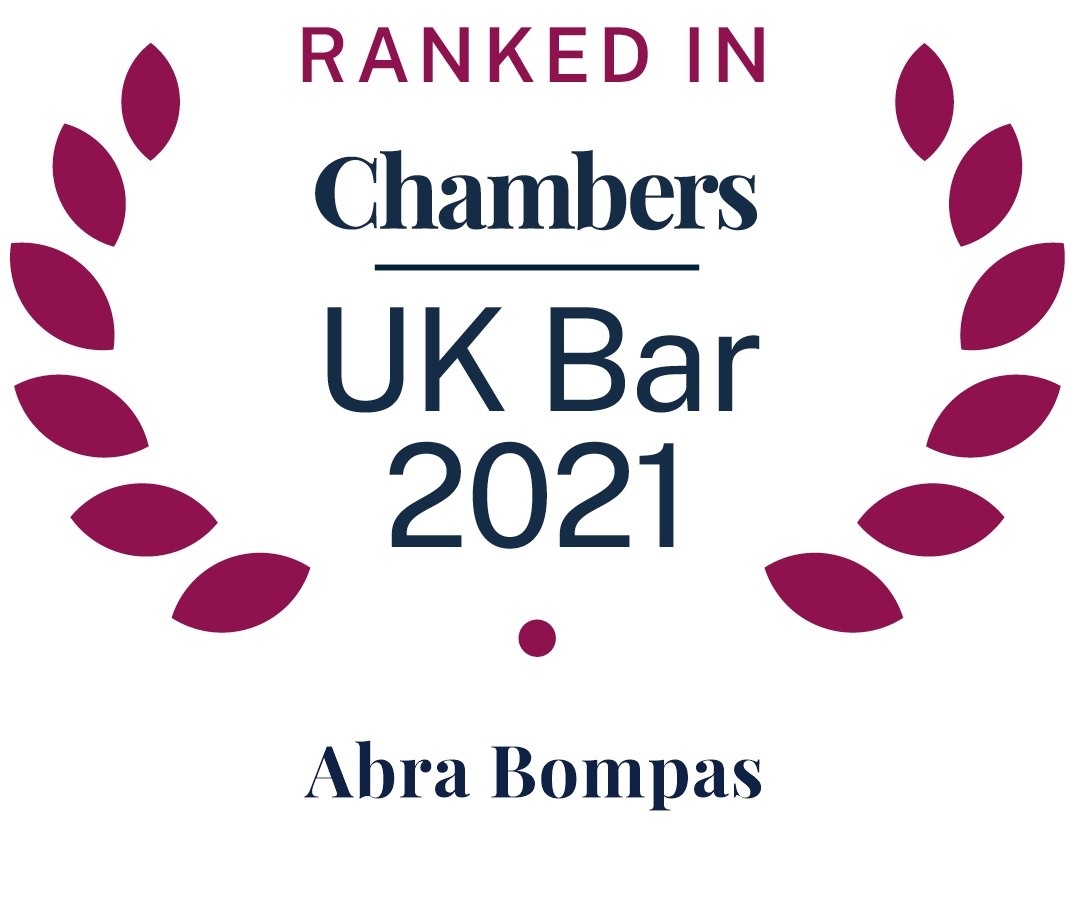 Abra Bompas’ practice covers the broad spectrum of commercial dispute resolution in the High Court (both led and unled) and the Court of Appeal, as wells as in international arbitration.  Abra often acts for clients in disputes arising in (but not limited to) the banking and finance sector (including insolvencies and mis-selling), in contractual claims across a range of industries, in share sale / warranty claims, shareholder actions and fraud claims. Abra was also seconded to the FSA (now FCA).

Most recently, Abra acted successfully for a Defendant in obtaining the adjournment of a 5-week Commercial Court trial due to commence in April 2020, as a result of the difficulties it would face in participating in a virtual hearing during the Covid-19 pandemic.

Abra is recommended in Chambers and Partners 2021 (Commercial Dispute Resolution) "She is very well prepared and her submissions are very succinct." "Abra is exceptional; her drafting is excellent." Who’s Who Legal Litigation 2018 and 2019 as a “Future Leader”, acknowledged as a “tenacious advocate” praised for her “proactive approach” and her “standout expertise in business and financial matters, as well as contractual claims and shareholder disputes”.

In litigation, Abra acted successfully in the Commercial Court in Yukos Finance B.V. and Others v Lynch and Others [2019] EWHC 2621 (Comm).  The Lawyer named the case one of “The Top 20 Cases of 2019”.  The claim was for up to circa £35 million.  The Yukos parties made claims under Russian law against five individuals  arising out of the auctions of Yukos Oil in Russia in 2007.  Abra acted for the Fifth Defendant, a senior former employee of a Russian investment bank.

With Zoe O’Sullivan QC, Abra acted successfully for the McLaren group in CRS GT Limited v McLaren Automotive Limited and Others [2018] EWHC 3209 (Comm), an expedited Commercial Court dispute between the supercar manufacturer McLaren and one of its supplier, CRS.  CRS alleged that it had certain contractual rights in relation to two McLaren race cars which are eligible to race in the GT3 and GT4 race series respectively.  The case involved a complex mandatory interim injunction.

Abra appeared as sole counsel before the Companies Court, on behalf of the Liquidator In the Matter of Crown Holdings (London) Ltd (In Liq) and Crown Currency Exchange Ltd (In Liq) [2015] EWHC 1876 (CH), on s112 applications (IA 1986) as to whether certain monies paid to the companies immediately before their insolvency was held on trust for the payors.

She appeared (with Richard Boulton QC), for the Insured in a 3-week UNCITRAL proceedings seated in Hong Kong. The Insured made a claim (circa US$25m) under a fidelity insurance policy as the result of a complex fraud involving aluminium trading on the LME.

In addition to her mainstream practice, Abra’s profile includes niche commercial cases.  She appeared before the Supreme Court in employment proceedings relating to the termination of a senior banker’s employment led by David Cavender QC in Société Générale, London Branch v. Geys [2012] UKSC 63.  She also appeared before the tax tribunal in Reed Employment Plc & 11 Ors v. HMRC [2012] STI 550 (tax / judicial review; with Malcolm Gammie CBE QC); and has acted in debt restructuring work (with David Wolfson QC), and in media-law group litigation for News Group Newspapers, in relation to claims arising out of the activities of Glenn Mulcaire and The News of the World, including voicemail interception.  She also has experience in challenges to Expert Determinations (including departure from instruction, bias and impartiality).