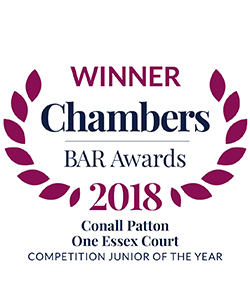 Conall Patton acts as an advocate and adviser in a broad range of commercial litigation and arbitration disputes. His areas of expertise include contract/commercial, energy, banking, jurisdiction and choice of law, professional negligence, commercial judicial review and competition law. In the most recent directories, he has been described as "One of the finest barristers that I have ever instructed at any level, Conall made silk this year and is destined to be a Star at the Bar" (Legal 500, 2020), “certainly destined for greatness” and “one of the absolute top-notch juniors” (Legal 500, 2018). He has previously been described as "a Laurence Rabinowitz of the future" (Chambers UK Bar 2012).

In recent years, Conall has appeared in all divisions of the High Court, the Court of Appeal and the Supreme Court, as well as in large-scale arbitrations under a variety of institutional rules. He is regularly instructed as a member of a silk-led Counsel team, as sole advocate or alongside a more junior barrister.

Conall is currently acting (with Laurence Rabinowitz QC and Patrick Goodall QC) for Autonomy in high-profile claims against its former CEO, Mike Lynch, and CFO, Sushovan Hussain. He is also acting (with Laurence Rabinowitz QC) for Tesco plc in defending claims in the Financial List under Schedule 10A FSMA arising out of an historic profit overstatement. Conall acts (with Daniel Jowell QC) for MAN in defending large-scale competition law claims in the Competition Appeal Tribunal for alleged overcharges on sales of trucks. He is acting (without a leader) for Glencore in defending tax indemnity claims arising out of the sale of a Peruvian mining company, including at a five-day Commercial Court trial in April 2018 which led to a judgment in Glencore’s favour. He is acting (with David Wolfson QC) for Marathon Oil in a claim relating to its role as operator of certain North Sea oil fields. The trial judge (Robin Knowles J) said that Conall’s cross-examination of a JV audit witness “stood out for its accuracy and concision”: see [2018] EWHC 322 (Comm) at para 46.

Details of Conall’s reported cases are available from the Full CV.

Conall is a member of the Bar of the British Virgin Islands.

Praise for Conall from Chambers UK 2022:

Banking & Finance: 'He is definitely one to watch.' 'He is incredibly bright but also has a sense of humour. Commercial clients rightly consider him a real star.'

Commercial Dispute Resolution: 'He is very good and has a very precise mind.'

Energy & Natural Resources: 'Conall is outstanding. His written work is very persuasive, he thinks of points no one else has thought of and and he has a very fast turnaround time.' 'His drafting is second to none, and his advocacy in court on his feet is equally impressive.' 'He is fiercely intelligent, super responsive and an absolute pleasure to work with.'

Banking & Finance: 'A very strong strategist and advocate – and a superlative drafter.'

Civil Fraud: 'A complete superstar: fiercely intelligent, user-friendly, a team-player and extremely nimble when on his feet.'

Commercial Litigation: 'One of the standout young silks at the Commercial Bar. Conall’s written and oral advocacy is concise and to the point – he has the ability (that judges love) to skewer the point in the fewest possible words. He is one of the opponents who, when you see his name, your heart sinks a little.'

Competition: 'He is one of the top new silks at the commercial Bar. A barrister with a very clear mind and a wonderfully calm manner.'

Energy: 'An absolute star, he is fantastically able and very sharp.'

International Arbitration (Counsel): 'He has a huge amount of knowledge about international arbitration and excellent technically. Always is prepared, works hard and gives you the right answer particularly where there are judgement calls to be made as to how to proceed and which arguments to run.'

Praise for Conall from Chambers UK 2021:

Banking & Finance: "He's exceptional, even by the standards of a top chambers. Incredibly clever, extremely responsive and cuts to the things that matter." "An excellent advocate. His written work is top notch. He fully deserves his new silk status. He'll be a leader of the future."

Commercial Dispute Resolution: "Amazing, very down to earth, very practical and excellent with clients." "He has the mental agility and the sheer brains to be able to turn his mind to anything."

Competition: "He has the flexibility, mental agility and the sheer brains to be able to turn his mind to anything." "He is super clever, approachable and just generally a huge asset to any team."

Energy & Natural Resources: "He has a phenomenal brain, is able to digest extensive complex documents in a really short space of time, give feedback at lightning speed, and he drafts beautifully."

Competition: 'He has a phenomenal mind and is wonderful to deal with.’

International Arbitration (Counsel): 'Has a deep knowledge of all things to do with international arbitration – he seems to have an appreciation of how arbitrators are likely to consider issues which arise and what is important and what is not.’

Civil Fraud: ‘As an advocate, his cross-examination is devastating and of a quality way beyond his call.’

Commercial Litigation: ‘An absolute star – one of the very best at One Essex Court.’

Energy: ‘A new silk who will be a star, he is always well-prepared and has a direct, “no-nonsense” style.’

Banking & Finance: ‘One of the finest barristers that I have ever instructed at any level, Conall made silk this year and is destined to be a Star at the Bar.’

Praise for Conall from Chambers UK Bar 2019 and Chambers Global:

Banking & Finance (Band 1): Enjoys a fast-growing reputation among peers and instructing solicitors particularly for his outstanding written advocacy across a range of areas including banking, competition law and energy. Such is the regard in which he is held that he often acts unled in major cases. He is a go-to for numerous instructing solicitors presented with complex, multi-jurisdictional banking cases. "Thoroughly deserves his reputation as one of the best juniors around." "He's very smart and produces work of extremely high quality in a remarkably short period of time. His advocacy is also very good."

Energy & Natural Resources (Band 1): Widely regarded as being at the vanguard of juniors in this field, he is capable of dealing with both the commercial and regulatory aspects of energy work. He has experience of advising and representing clients both in court and in arbitration, and acts for high-ranking developers and facility operators, as well as commodity traders. "Extremely bright and just turns things around remarkably quickly." "He has a very concise and persuasive style of advocacy." "One of the few that 'get' the industry at a very detailed level."

Commercial Dispute Resolution (Band 1): "His drafting is particularly strong, and he has very good judgement." "Conall gets to the nub of an issue quickly, and is exceptionally effective at breaking down complex issues in a simple fashion."

Competition: ‘Undoubtedly one of the top juniors at the commercial Bar and has also gained substantial experience in competition litigation.’

International Arbitration (Counsel): ‘One of the absolute top-notch juniors, so incisive and calm.’