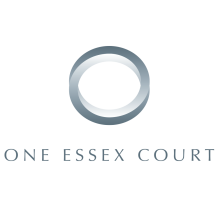 One Essex Court is delighted to announce that the ten sets of Chambers participating in the Mentoring Scheme for underrepresented groups have, between them, offered places on the scheme to nearly 200 applicants from groups that are underrepresented at the Bar.

The scheme will make a real contribution to increasing opportunity and diversity at the Bar, by providing mentees with a source of information and advice, and by making it clear that a career at the Bar is open to anyone, from any background.

Further details about the scheme are available here.

The participating sets of Chambers are: