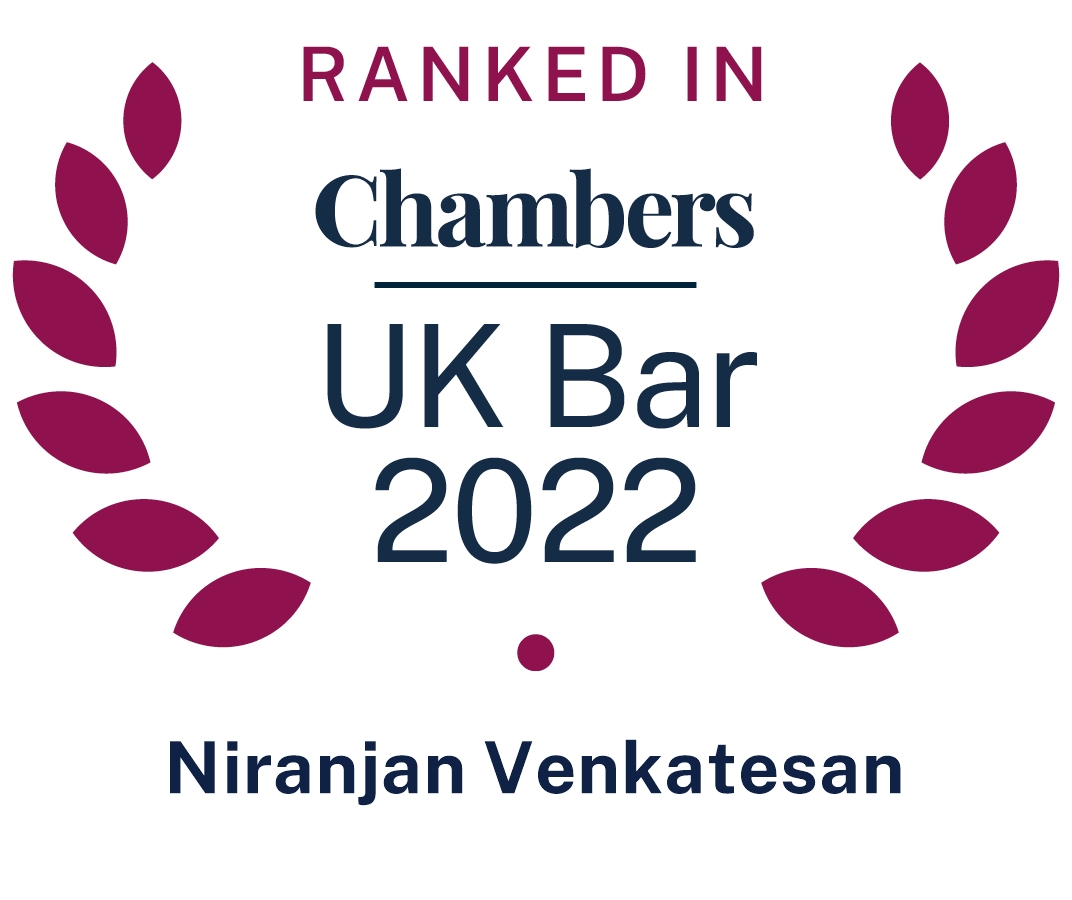 Niranjan came to the attention of the legal directories at an unusually early stage (around three years call) and has rapidly developed a broad commercial practice. He has substantial appellate experience, having appeared on numerous occasions in the Supreme Court and the Court of Appeal in cases involving complex questions of law. He has also acted in high-value cases in the Commercial Court and the Chancery Division and in international arbitration, in addition to appearing as sole counsel in the High Court and various County Courts. Before coming to the Bar, Niranjan read and taught law at Oxford, where he was a Vinerian, Eldon and Rhodes Scholar.

Niranjan is recommended in Chambers & Partners 2022 (Commercial Dispute Resolution) "He is one of the most in-demand juniors at the moment. He has encyclopaedic knowledge and always listens to and incorporates the solicitor's views." Legal 500 2021 (Commercial Litigation) "Exceptionally talented and has the skills and manner that totally belie his relatively junior level. His knowledge of the law is encyclopaedic - solicitors have never known any lawyer with such knowledge and recall of authorities"; Legal 500 2021 (Banking & Finance) "Brilliant and a top-notch strategic thinker. Niranjan has an absolutely mastery of procedural law and digests case law effortlessly"; Chambers & Partners 2021 (Commercial Dispute Resolution) "Truly phenomenal, incredibly sharp and bright and someone who knows case law inside out - he's a legal dictionary." "He is an incredibly creative thinker who comes up with ingenious arguments that no one has thought of."; Legal 500 2020 (Commercial Litigation): " A huge brain and an asset to every team"; Legal 500 2020 (Banking & Finance): "He is extremely intelligent, user-friendly and responsive, and his written work is always first rate." Chambers & Partners 2020 (Commercial Dispute Resolution): "Incredibly nice, bright and incisive, he drafts concisely and gets to the nub of an issue."  "He can deal with the analysis of a complex issue in a short space of time, and he's really collaborative" and Chambers & Partners 2019 (Commercial Dispute Resolution): “his attention to detail is remarkable, and he’s extremely responsive and very easy to work with”. “Always willing to assist, he has great legal capability and offers practical advice.”  He has a particular interest in jurisdictional disputes and in misrepresentation, civil fraud and the law of damages, which were the subject of his doctoral thesis at Oxford. He also practised at the Indian Bar between 2011 and 2013 in the chambers of Mr Arvind Datar SC and is able to advise on matters of Indian (commercial) law.

Grand View PTC v Wong : Acting (with Mark Howard QC and Jonathan Adkin QC) for Grand View in the Privy Council in a case that raises important questions of law concerning powers of amendment under trust deeds and the rule against perpetuities

Enka Insaat ve Sanayi AS v OOO “Insurance Company Chubb [2020] UKSC 38, [2020] 3 All ER 577 (CA): Acted (with Robin Dicker QC) for Enka in the Supreme Court and the Court of Appeal in what is now the leading case on the principles for ascertaining the proper law of arbitration agreements and the role of the court of the seat of arbitration in granting anti-suit injunctions.

BTI 2014 LLC v Sequana SA: Acting (with Laurence Rabinowitz QC) for Sequana and the former directors of its subsidiary company in the Supreme Court and the Court of Appeal. The case raises novel questions of company and insolvency law concerning the fiduciary duties of directors in relation to the payment of dividends and the scope of section 423 of the Insolvency Act.

PJSC NBT v Mints: Acting (with Laurence Rabinowitz QC) for the Second and Third Defendants in this complex litigation, which has given rise to an important judgment concerning issue estoppel and abuse of process.

TAQA Bratani v FOGUK: Acting (with Laurence Rabinowitz QC) for the Claimants in these high-profile Commercial Court proceedings concerning the forfeiture of interests previously held by the Defendant in three oil and gas fields in the Brae complex

Arcadia Petroleum Ltd v Bosworth: Acted for Arcadia in the Supreme Court and the Court of Justice of the European Union in a jurisdiction challenge arising out of a claim worth in excess of $300 million. The issues included the jurisdictional characterisation of conspiracy, knowing receipt, dishonest assistance and breach of fiduciary duty claims under the Brussels Regulation (Recast) and the Lugano Convention.

A v B: Acting (as sole counsel) for the claimant in a c.$7.5 million ICC arbitration arising out of the pharmaceutical industry