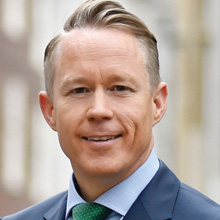 Darren is the Senior Clerk at One Essex Court.  He began his career as a barristers' clerk at One Essex Court in 1991 and now leads our clerking and administrative teams, with overall responsibility for the strategic management and development of members’ practices and Chambers business as a whole.

In addition to managing the Chambers and members’ practices at all levels, Darren retains direct responsibility for the day-to-day practice management of the Queen's Counsel in Chambers.  As such, he has a detailed knowledge and understanding of the specialist practice areas in which all members operate and an awareness of client expectations and needs.  He has a 'commercial' approach to fee negotiation and is willing to discuss progressive fee arrangements to suit differing client and case requirements.

Darren is assisted by a first class clerking and administration team, which includes Jackie Ginty, the Deputy Senior Clerk and Joanne Huxley, the Head of Administration.

"Darren Burrows, their senior clerk, is incredibly proactive, incredibly user-friendly and honest as well. He's always been one of the most professional clerks and he insists on those standards. He's also just a really nice guy."Chambers UK 2019

"The clerks are superb: they're reactive, easy to get hold of and straightforward." "Chambers as a whole is generally very efficient and user-friendly, while the clerks are realistic and manage expectations effectively." Darren Burrows is the senior clerk and a man noted for his dedication and professionalism.Chambers UK 2019

On the practice management side, some say that the clerking here is 'probably the best of all the Magic Circle sets'. The clerks are 'personable, commercial and reliable', 'always willing to go the extra mile', and also 'reasonable and pragmatic on fees'. Darren Burrows is 'one of the best senior clerks in the business'. The Legal 500 2017

The "excellent" Darren Burrows heads up a stellar clerking team which earns impressive praise from clients. One source stated "I have to say, I have used the set more and more not just because of the barristers but because the clerks are extremely helpful. They are very responsive and much more attentive to clients' needs than most, and are open and frank about the strengths and skills of individual barristers. They are just very easy to deal with."Chambers UK 2017

'Senior clerk Darren Burrows is just very easy to deal with and he always calls you back. Among the big sets this is the best team.'Chambers UK 2016

The team, led by senior clerk Darren Burrows was praised by one commentator for being 'very responsive. When we were on a tight deadline the clerks came up with options for us...'Chambers UK 2016

'The clerks are utterly reliable. You know you can phone them up, explain your problems and they will solve them.' Darren Burrows is the highly respected senior clerk. Chambers UK 2016

“They’re very good. I use One Essex more than other commercial chambers largely because of their clerking team led by Darren Burrows. They don’t overbook or double-book and will helpfully liaise with the court for us.” Chambers UK 2015

Darren Burrows leads the clerking team at One Essex Court. “ The clerks there are absolutely superb. They’re first class, and look after us and our clients very well.” Chambers UK 2015

One solicitor said: “it is well known that they have one of the best clerking systems in place. On this side of the profession we appreciate modern clerking systems, and Darren Burrows and his team provide one.” Chambers UK 2014

Although the barristers were widely praised, it was the “standout clerks” at One Essex Court, seen by many to “set the standard for clerking,” that really shone. One solicitor stated that “clerking at One Essex Court is excellent; there is a seamless team there” that is “approachable, responsive, professional and reliable.” Senior clerk Darren Burrows sets the tone. He “provides an excellent service, is very solicitor-conscious and is someone you can have a frank chat with about the pros and cons of his barristers.” One content solicitor said: “Darren has a real sense of the level of service barristers should provide and he knows the importance of having a two-way relationship with firms of solicitors.”He runs a tight ship and ensures that there is a pricing structure in place which allows the set to be “creative in its fee solutions.” Such is the success of the clerking here that one observer mused: “I would suggest other chambers come to One Essex Court to see how proactive and communicative clerks can be.” Chambers UK 2012

Its success as 'a premier set for high-value, complex cases' is founded upon the fact that 'not only does it have fantastic barristers, but also clerks who are the best in the business.' Chambers UK 2011

Its individuals are up to any task and benefit from being well clerked. As one solicitor stated, 'the set has always had some of the best clerks at the Bar. They're efficient, personable and are poeple you can have an honest chat with. Interested in business development, they are light years away from the old-style clerks who were just a postbox for briefs.' Chambers UK 2011

'The clerking at One Essex Court is the best at any chambers. Darren Burrows runs things in a very modern and responsive way, and is a pleasure to deal with'.THE LEGAL 500 2009